The school year is coming to an end and so is this year’s Student Program. Our Student Chapters have been busy holding conferences, film festivals, panel discussions, and publishing a law journal to raise awareness about this year’s theme on children’s rights. 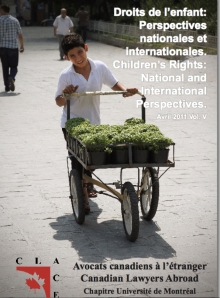 Although the UN Convention on the Rights of the Child was adopted in 1989, and has been ratified by all of the UN member states except the United States and Somalia, in practice, most nations have failed to implement many of the Convention’s provisions. This includes Canada.

Much attention in Canada is rightly focused on advancing the rights of children globally. Many groups are working to help developing countries achieve the Millennium Development Goals of eradicating extreme poverty and hunger especially among children, achieving universal primary education, and reducing child mortality. There are many international campaigns focused on ending the use of child soldiers. A number of great organizations, including CLA partners Beyond Borders and ECPAT International are working to advance the rights of children to be free from sexual abuse and exploitation.

But Canadians also need to be doing more at home because right now we’re failing to protect the rights of our children. In 2010, UNICEF issued a report showing that Canada ranks 17th out of 24 countries in terms of child poverty, among the worst for high income countries.  Here are some other eye-opening statistics from UNICEF Canada:

The situation with respect to our Inuit, Métis and First Nations children is shocking:

The situation of Inuit children living in Nunavut is particularly worrying. As reported in the recent Globe and Mail series on Nunavut, seven in ten preschoolers in Nunavut grow up in houses without adequate food, and abuse of children is ten times the national average.  The suicide rate for boys and young men in Nunavut is extraordinarily high. These statistics are completely unacceptable.  Clearly something needs to be done to protect the rights and well-being of our children. 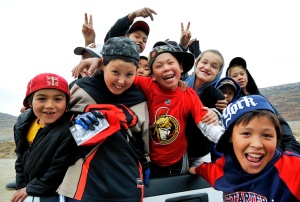 There are some great organizations doing work in Canada in this regard. For example, UNICEF Canada works tirelessly to champion children’s rights and has a great campaign during this federal election to identify what candidates will do to promote the rights of children and to encourage them to sign-on to UNICEF’s Charter for Children. The Canadian Coalition for the Rights of Children also does excellent work towards the full implementation of the Convention on the Rights of the Child.

However, clearly we need to be doing more.  One initiative that would make a big difference would be the creation of a national Children’s Commissioner. This Commissioner would not only be charged with ensuring that the federal government implements its commitments under the Convention on the Rights of the Child, it would conduct investigations and issue reports, raise awareness about children’s rights, coordinate with provincial and territorial governments and agencies, and ensure that the voices of children are represented in debates about issues that affect them.  And the provinces and territories that don't have a Children's Commissioner yet, should create one to ensure that the voices of children are heard in legislative and policy debates.

We have an obligation to nurture and protect our children. However, although Canada is a rich nation that has committed to implementing the Convention on the Rights of the Child, we are failing too many children. That’s unacceptable. And that’s something we should all be talking about during this election and working to change.

We’d like to thank this year’s sponsors of our Student Program:  LexisNexis Canada, WeirFoulds LLP, The Dominion of Canada General Insurance Company, the Department of Canadian Heritage and the Department of Justice.